In 2021 Cellnex carried out a study to quantify the Company's socio-economic contribution in eight countries in which the company operates. The study calculates the impact  of its activity on a GDP and employment through the use of input-output tables, a robust and widely used and accepted methodology for this type of measurement.

The study covers the eight main countries in which Cellnex operates, which together, they represented around 86% of the Group's global turnover in 2021. These countries are: Spain, France, Italy, Switzerland, the United Kingdom, Portugal, the Netherlands and Ireland. As such, the impact of Cellnex covers the contribution of the 63 companies that Cellnex has in the countries that were studied does not include the companies within Austria, Denmark, Finland, Sweden and Poland due to their lower representation at  turnover, and also because some of these companies located in these countries were integrated into Cellnex through out the year 2021.

It should be noted that the estimates of indirect and induced impacts are based on the expenditure and investments made by the company in local suppliers in each of the countries under analysis and do not include the expenditure and investments made between companies of the Group itself, with the aim of avoiding duplications in the estimated impacts. In this regard, it must be taken into consideration that the impacts by country are subject to the impacts of the investment cycle of Cellnex in the country and these may be volatile over time and therefore be over or under represented depending on the year studied.

The economic impacts, were estimated using input-output methodology. This methodology is based on the use of input-output tables prepared by the national statistical institutes of each country and harmonised for the OECD database to guarantee comparability between countries. 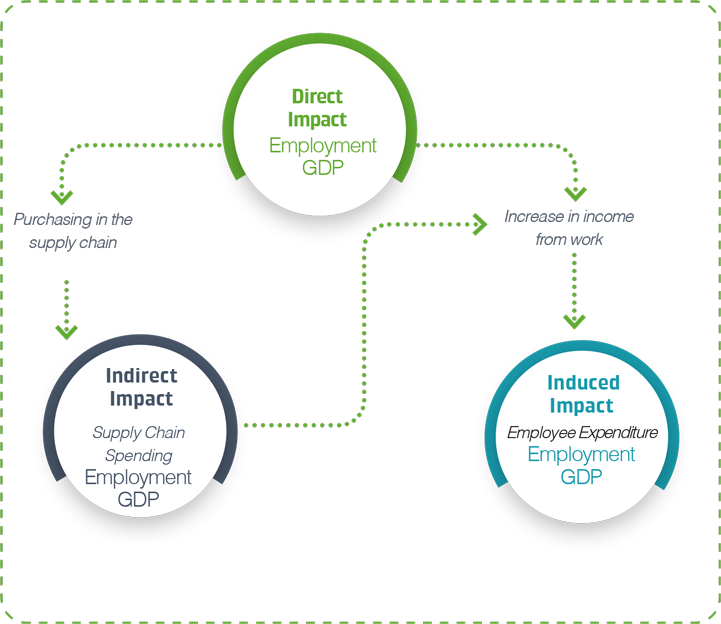 In 2021 Cellnex had a total socioeconomic contribution in the 8 countries analyzed of
€ 4,498 Mn
in terms of GDP.

In 2021 Cellnex made a total socio-economic contribution (taking into account the direct, indirect and induced impact) in the eight countries analyzed of € 4,498Mn in terms of GDP. 39.1% (€1,759 Mn) is Cellnex's direct contribution to the GDP of the countries under analysis (Direct Impact), 44.7% (€2,012 Mn) is the impact generated by the expenditure and investments made by Cellnex in the supply chain of the countries studied (Indirect Impact), and the remaining 16.2% (€726 Mn) is the impact generated by the increase in consumption arising from the increase in earned income associated with direct and indirect jobs (Induced Impact). The breakdown by country of the €4,498Mn in terms of GDP of Cellnex's total contribution is presented below. 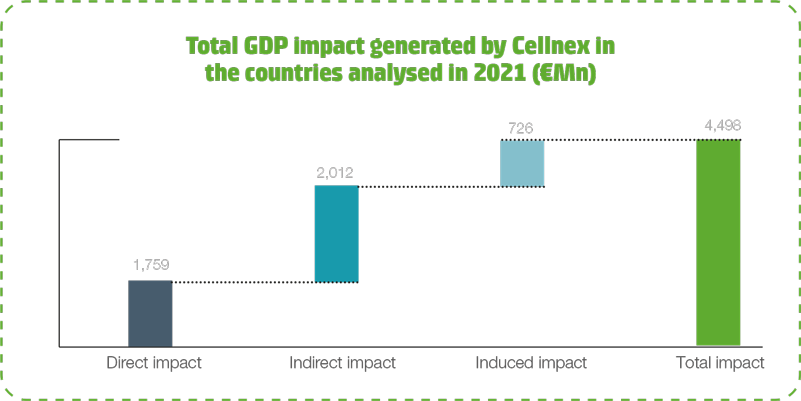 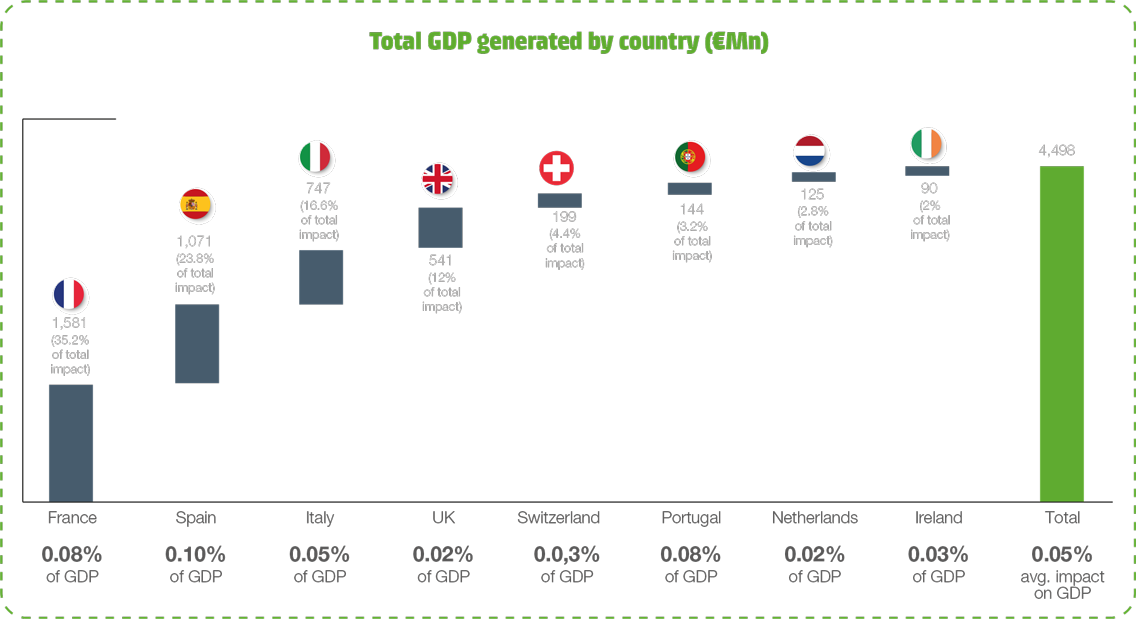 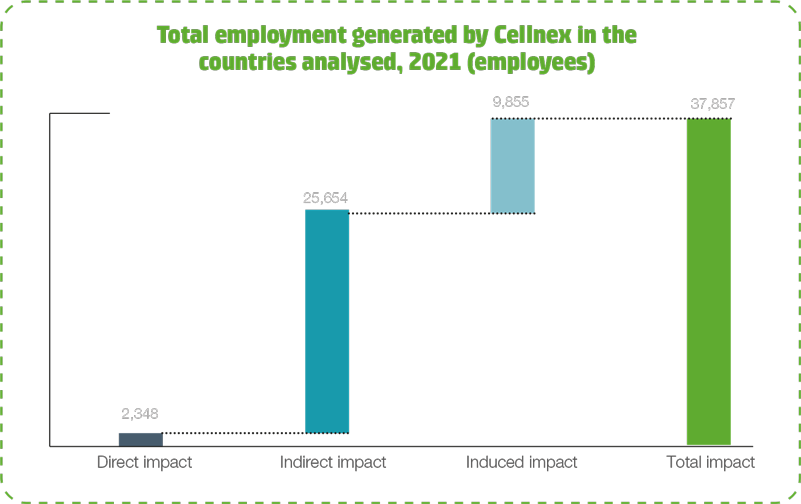 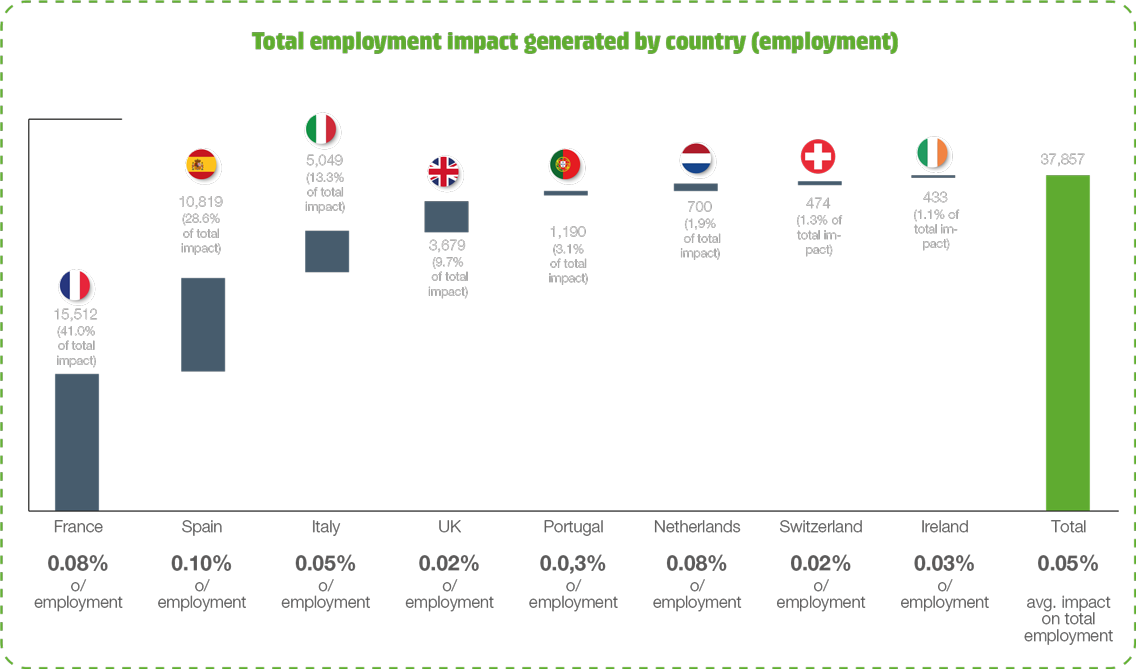 31 GVA is equal to GDP at market prices minus net taxes on products, although for ease of understanding GDP is used because of its more generalized use.