Sustainable use of resources

Energy saving and efficiency, improved energy performance and the use of renewable energies are indispensable principles in all Cellnex activities.

Approval in 2021 of the Cellnex Energy Transition Plan framework.
Target has been approved in 2021, of 100% renewable energy consumption by 2025 across the organisation.

The Cellnex Energy Policy was approved in 2020. This Policy establishes that the Company promotes the efficient use of energy, through the implementation of energy saving and efficiency measures in work processes and conduct, and the control and monitoring of consumption in the most significant uses. All of this is based on compliance with applicable legal and regulatory standards, at international, European, state, regional and local level, as well as the willingness to adapt to future standards,  and the requirements of customers and society.

Cellnex's commitment to energy management established in the Energy Policy has was put into effect in 2021 with the adoption of the Cellnex Energy Transition Plan framework. The Plan aims to set progressive guidelines to make energy supply more sustainable, working alongside the Company's primary customers to achieve this.

Along with the approval of the Energy Transition Plan framework, the corporate Green Power Purchasing target was also adopted in 2021, setting a goal of consuming 100% renewable energy across the organisation by 2025. To monitor the achievement of the target, an intermediate target of consuming over 70% green energy was also been set for 2022. In 2021, the overall share of green energy consumption across the Organisation was approximately 40,5%.

In this regard, one of the main milestones in 2021 in terms of energy, was that all new Business Units incorporated in Cellnex during 2021 included the provision of green energy in electricity supply contracts. For example, in Poland, the Polkomtel MSA Business Unit includes the supply of 100% green energy through the Guarantee of Origin (GoO).

Guarantees of Origin are an electronic certification issued by the National Markets and Competition Commission (CNMC), or the competent authority in any other EU member state, which allows electricity suppliers to certify that the energy they sell comes from renewable generation sources. This mechanism ensures that the producer is delivering renewable energy and certifies the amount of green energy being supplied to the system.

In addition to the objective of purchasing of green energy, work is currently under way to finish establishing the commitments and objectives related to the other three pillars that make up the Energy Transition Plan, related to:

Cellnex will complete the renewal of DTT, FM and DAB equipment, focused on reducing consumption, by June 2022, with an implementationlevel of 75% by the end of 2021. 305 DTT, 318 FM and 5 DAB equipment be replaced, within the framework of this project, with an estimated saving in electricity consumption of 10GWh/year.

In addition, in 2021, new free-cooling projects were implemented with an estimated reduction of 1GWh/year. Moreover, progress has been made in the approval of high-efficiency power stations, and in the evaluation of various energy storage technologies. 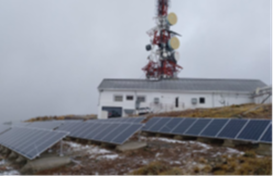 Spain energy self-generation pilot: "The calculations already foresaw the feasibility of the project, but it is when the difficulties of the first installations are overcome and the success of the production is proved, that the team really believes in the possibility of bringing solar energy to every corner of Cellnex".
Arturo Losada,
Country Head of Infrastructures

Cellnex is implementing a solar energy self-generation project in Spain, which involves the installation of solar panels at 692 rural sites with which it expects to produce around 3GWh/year of 100% emission-free energy at the point of consumption, reducing distribution losses. The solar initiative in Spain is launched with the aim of using self-generation of energy as a lever to capture inefficiencies and reduce the carbon footprint.

The Pilot consisted of four stages, which made it pssible to identify of telecommunications infrastructure in potential rural sites to develop energy self-generation,conduct studies on any adaptation and modifications required. AAt the same time, constant negotiations have been under way with landowners and infrastructure operators.

In this way, it is expected that regulatory changes regarding energy costs, technological advances, the reduction of costs for the main components and the experience gained during the pilot will allow Cellnex to initiate a mass deployment of self-generation at its sites.

In addition, pilots are planned for 2022 in Italy and other countries to green-light the possible extension of self-generation using photovoltaics, as well as other technologies such as wind or hydrogen-based fuel cells.

To certify the efficient energy management efforts being developed at Cellnex, work is under way to ensure 80% of the organisation's energy consumption will meet ISO 50001 criteria by 2022-2025. In this regard, Spain is already ISO 50001 certified.

The actions undertaken in terms of energy management are focused on the transition towards a low-carbon economy, which is established as one of the lines of action of the company's Strategic Sustainability Plan, intended, among other objectives,to mitigate the impact that the company's activity may have on climate change.

The breakdown of total energy consumption by source is presented below. 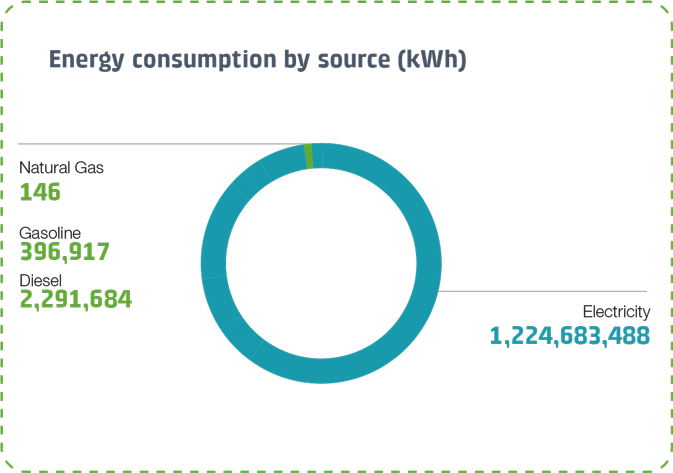 Management of other resources

However, to demonstrate Cellnex's commitment to ensuring the sustainability of its activity, in 2021 the Group's water footprint for 2020 and 2021 was calculated according to the methodology defined in ISO 14046. Cellnex's objective is to calculate its water footprint annually to monitor and control the impact of Cellnex's activity on this resource. 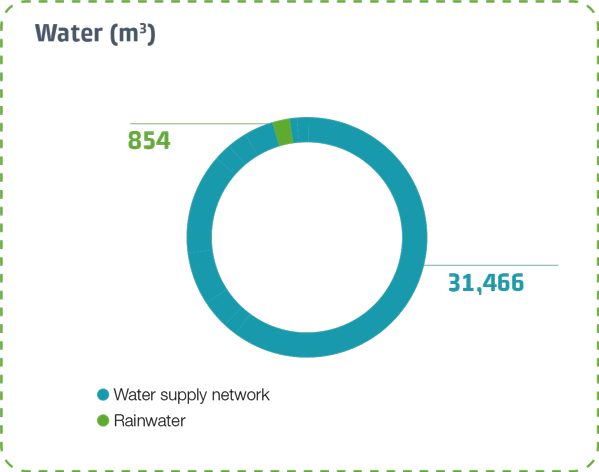 Cellnex produces practically no waste directly, however, waste is generated through its the activities of its suppliers. As such, this is a non-material issue for Cellnex. Nevertheless, waste management is carried out in the Organisation in line with the principles of precaution and preventive action, based on the waste management hierarchy. Consequently, the first priority is the prevention/reduction of waste generation during the course of the activity. When waste is generated, the priority is to prepare it for reuse, then recycling and, finally, maximum recovery before disposal.

Reduction and reuse are the key to protecting the environment, saving on the environmental and economic costs associated with waste management and extending the life of products. That is why the Organisation is committed to ensuring that waste produced by its suppliers and contractors in the course of their activities at Cellnex sites (construction, operation, maintenance and decommissioning) is properly managed.

This process is ensured through the progressive implementation of the Integrated Management System, whereby Cellnex periodically requests evidence of proper waste disposal and encourages its suppliers to find alternatives to waste disposal where possible, recycling the metal used for tower construction and maintenance.

Life Cycle Assessment (LCA) is a methodology standardised by ISO 14040:44 (2006) that systematises the acquisition and generation of information on the environmental aspects of products, services and processes by analysing inputs (consumption of raw materials and energy) and outputs (emissions to water, air, soil, waste and by-products) throughout all stages of their life cycle.

In 2020, the company started Life Cycle Analysis of Telecommunications Infrastructure Services to identify critical points, identify the environmental impacts generated along the value chain, minimise the risks of transferring impacts from one process to another, and thereby obtain rigorous information for decision-making.

The key principles on which the strategies promoting more circular production and consumption models are as follows: 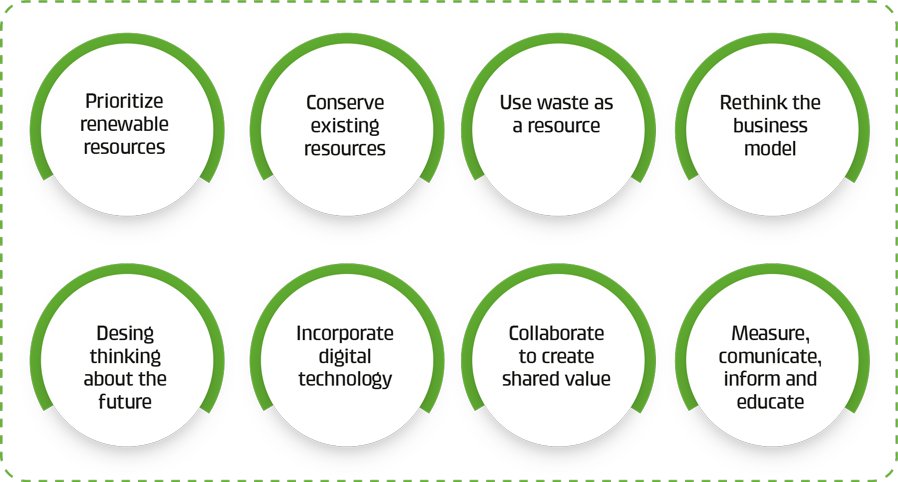 Based on the Life Cycle Analysis (LCA) of the Telecommunications Infrastructure Services (TIS) carried out in 2020, work was undertaken in 2021 on the preparation of a starting point document, outlining the forces of change, and the ecodesign opportunities that can be addressed by Cellnex. An opportunity prioritisation exercise will be carried out, during 2022, which will form the basis of the sustainable vision and define the strategy to be followed.

Carbon footprint and climate change Management and follow up of main risks, opportunities and environmental impacts