On 20 June 2016, the IBEX 35 Technical Advisory Committee approved the inclusion of Cellnex Group (CLNX: SM) in the benchmark index of Spain’s stock exchange, the IBEX 35, which brings together the principal companies on the Spanish stock exchange in terms of capitalisation and turnover. This milestone brought with it a broadening of the shareholder base, giving Cellnex higher liquidity and making it more attractive to investors. At present Cellnex has a solid shareholder base and the majority consensus of analysts who follow the Company +75% - is a recommendation to buy.

During the second half of 2021, Cellnex Board of Directors approved the Cellnex Treasury Share Policy, which can be consulted on the corporate website. Thus, during 2021, Cellnex carried out discretionary purchases of treasury shares for an amount of €57,755 thousand (€6,509 thousand during 2020).

The treasury share transactions carried out in 2021 are disclosed in Note 14.a to the accompanying consolidated financial statements.

The approved shareholders’ remuneration policy, which is amended from time to time, aims to mantain an appropriate balance between shareholder remuneration, the parent company’s profit generation and the parent company’s growth strategy, while pursuing an adequate capital structure. When implementing of the Shareholders’ Remuneration Policy, the Company is focused on distributing an annual dividend by an amount 10% above the dividend distributed for the year. As a result, each year the parent company distributes dividends against either net profit or distributable reserves attributable to the Company for the respective financial year.

On 21 July 2020, the General Shareholders’ Meeting approved the distribution of a dividend charged to the share premium reserve with a maximum of €109 million, to be paid upfront or in instalments over the years 2020, 2021, 2022 and 2023. It was also agreed to delegate to the Board of Directors the authority to establish, if appropriate, the amount and the exact date of each payment during that period, while always remaining within the maximum overall amount stipulated.

Dividends will be paid on the specific dates to be determined in each case and will be duly announced.

Cellnex provides various channels of communication to its shareholders.

Cellnex works continuously to maintain a good two-way relationship with its shareholders. To that end, there is a policy for communication and contact, which states that the Board of Directors will be responsible for providing suitable channels for shareholders to find any information on to the management of the Company, and for establishing mechanisms for the regular exchange of information with institutional investors that hold shares in the Company.

The Company has several communication channels to ensure effective compliance with the principles of the above-mentioned Policy, some of which are general channels, designed to disseminate information to the public, while others are private and primarily intended for shareholders, institutional investors and proxy advisors.

The general channels are the website of the Spanish Stock Exchange Commission (CNMV) and other bodies, as well as the Cellnex Corporate website. The private channels for use by shareholders and investors are the various social networks on which Cellnex has an account (such as YouTube, Flickr, LinkedIn, Twitter, SlideShare and RSS), as well as the “Shareholders and Investors” section on the Company website and the Investor Relations Area. Concerns can also be expressed at the General Shareholders' Meeting.

Cellnex improved its score in the main sustainability indices.

It is increasingly common for companies to incorporate ESG pillars in the development of their activity, since, among other things, the weight given to the implementation of actions aligned with ESG criteria is very important to investors when choosing one investment or another.

Cellnex is present in the main sustainability indexes and is evaluated by the most reputable sustainability analysts at international level, including CDP, Sustainalytics, FTSE4Good, MSCI and Standard Ethics. Cellnex demonstrates its commitment to meeting investors' expectations through transparency and accountability in terms of sustainability.

In 2021 Cellnex improved the global score in all these indexes in relation to the previous year, thus reaching all-time highs. The 2021 scoring rates by dimension are given below. 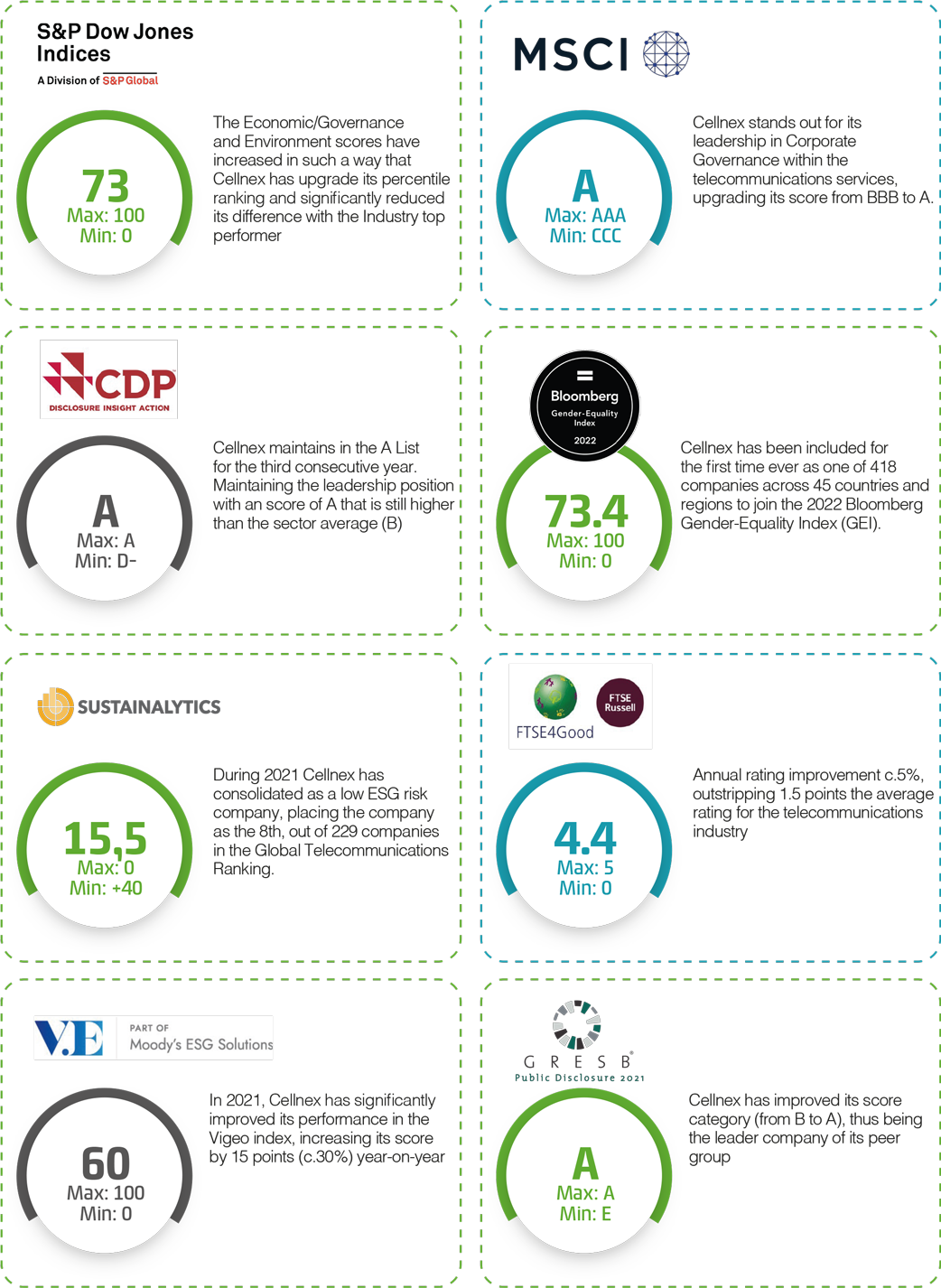 The Dow Jones Sustainability Indices (DJSI) are a family of best-in-class benchmarks for investors who have recognised that sustainable business practices are critical to generating long-term shareholder value and who wish to reflect their sustainability convictions in their investment portfolios. Created jointly by S&P Dow Jones Indices and SAM, the DJSI combine the experience of an established index provider with the expertise of a specialist in sustainable investing to select the most sustainable companies from across 61 industries. The score ranges from 0 to 100, where 100 is the best score that can be obtained.

Cellnex participates each year in the DJSI index as a guest company. In 2021, S&P recognised Cellnex's progress in terms of sustainability, including the Company as a member of the Sustainability Yearbook.

The FTSE4Good index series is designed to measure the compliance of companies that demonstrate a high level of competence in their environmental, social and governance practices. They are used by many financial market players in the creation and evaluation of so-called responsible investment funds and other products that integrate environmental, social and governance factors into their investment decisions.

The indexes identify companies that best manage the risks associated with these factors and are used for tracking index funds, for structured financial products and as a benchmark. They are also the benchmark for comparisons between investments.

In terms of the overall ESG rating, Cellnex obtained a score of 4.4 in 2021, up 0.2 points on 2020. Note that although the average score of the industry and subsector in the Environment and Social dimensions has risen, Cellnex increased the positive difference with them in these two dimensions.

In 2021, Cellnex obtained an A for the third consecutive year, meaning, it continues to be a Leadership Brand. 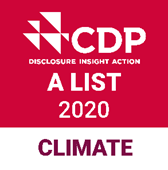 CDP uses a thorough and independent methodology to assess these companies, assigning a score from A to D- based on completeness of reporting, awareness and management of environmental risks, as well as demonstration of good practices associated with green leadership, such as setting serious and ambitious targets. The maximum score that can be achieved is an A, and companies that do not disclose or provide insufficient information are given an F rating.

In 2021, Cellnex obtained an A for the third consecutive year, which means that it continues to be a Leadership Brand. The score obtained continues to be above the sector average and it is among the 38% of companies that achieved the Leadership level in the Activity Group.

Cellnex improved its score in "Objectives" (from C to A) and "Energy" (from B- to B). However, the scores obtained in "Opportunity Disclosure" and "Business Strategy and Financial Planning" fell slightly (from A to A-). Note that Cellnex's score categories are always equal to or better than the industry average.

Sustainalytics is an environmental, social and corporate governance (ESG) research and rating company for investors worldwide that measures a company's ESG risk, understood as the degree to which a company's economic value is at risk due to ESG factors, i.e. the magnitude of a company's unmanaged ESG risks. The rating ranges from 0 to 100, where the higher the score, the higher the risk. Values from 0 to 10 indicate negligible risk.

Cellnex is part of the STOXX Global ESG index, which offers a representation of the world's leading companies in terms of ESG criteria, based on the indicators provided by Sustainalytics.

In 2021 Cellnex has once again made a qualitative leap in the Sustainalytics assessment, as it has once again moved up a category in terms of "Market capitalisation" from 12-15 million dollars to 27.8-30.3 million dollars, as well as consolidating its position as a low ESG risk company. This puts the company in eighth place in the Global Telecommunications Ranking.

Cellnex has improved its ESG Risk Rating in all relevant categories by at least 7 points, except for the Human Rights-Supply Chain category, which remained virtually unchanged. Note that five of the categories belong to the low risk classification, while the rest are classed as negligible.

In terms of ESG Risk Exposure, owing to Cellnex's expansion and the increase in sites and nodes, the Company has been considered slightly more exposed to ESG Risks (+2.1), as it is responsible for securing the information of a large number of customers.

Cellnex achievied A status for the first time

MSCI measures the intersection between a company's core business and the company's resilience to long-term ESG risks. For the rating, 35 key issues are selected annually for each industry and weighted according to MSCI's mapping framework on a scale of 0-10, the company's final score is adjusted based on overall industry performance and assigned a letter grade based on an AAA-CCC scale. The AAA rating is the best that can be obtained.

In 2021 Cellnex significantly improved its ESG Action Rating according to the MSCI index, increasing its score by 0.9 points and achieving A status for the first time. Cellnex has improved its score in all MSCI categories, except for carbon emissions (Environmental dimension) and Labour Management (Social dimension), where the score remained unchanged. Of particular note is the 0.8 point increase in the Governance dimension, which accounts for 57% of the total score. Furthermore, in 2021, Cellnex's score is 0.4 points higher than the sector average

The Vigeo indexes are composed of listed companies and are ranked according to an assessment of their ESG performance. The ratings are weighted and measure the company's performance against a set of risks defined to monitor and evaluate corporate responsibility. The score ranges from 0 to 100, with 100 being the best score.

In 2021 Cellnex Group increased its overall ESG score for the third consecutive year, achieving a score of 60 up 33% on last year). In addition, Cellnex is well above the sector average in all three dimensions: +12 points in the Governance dimension, +17 points in the Social dimension and +11 points in the Environment dimension. In terms of the transition to a low-carbon economy, Cellnex's carbon footprint is rated B (significant) and the energy transition score as Robust (58/100).

In terms of risk and opportunity management, it is worth noting the robustness with which Cellnex manages the following high-risk factors: Fundamental Human Rights, Board of Directors, Career Management and Health and Safety.

In 2021 the Company was placed in the A category, in GRESB public disclosure

The GRESB Public Disclosure Level is an overall measure of ESG disclosure by listed real estate companies, based on a selection of indicators aligned with the existing GRESB infrastructure asset assessment. The public disclosure level provides information on the ESG disclosure activities of GRESB participants and non-participants and provides investors with information that is not currently captured in the GRESB Infrastructure Asset Assessment. The rating is based on an A-E scale, where A is the best achievable score.

For the first time since Cellnex has participated in this index, in 2021 the Company was placed in the A category, with a score of 85 points. Compared with the previous year Cellnex improved its score in all five topics. Note that Cellnex improved its ranking category in all disclosure topics (from C to B and from B to A), except in the "Sustainability Disclosure-Governance" topic, where Cellnex maintains an A.

With the score obtained in 2021, and considering the Comparison Group (Europe/Data Infrastructure), Cellnex is positioned as the leading company in its peer group.

Boosting our talent, being diverse and inclusive Business Perspective